The Sneaky Pete Holster Company is a small family owned and operated business located in New York State. They are actually so small that they don’t have any kind of phone staff and only handle customer support by email through their “Contact Us” page on their website which can be located at http://www.sneakypeteholsters.com .

My wife, who recently obtained her Conceal Weapons Permit, has been looking for a good holster that would allow her to move her newly purchased Ruger LCP .380 from her purse to her person. So when her birthday came around and she still had not found a holster she liked, I took the matter into my own hands and started searching for a holster that I thought would fit the bill. I found several that I liked on the market, but none of them had the fit and finish that Sneaky Pete appeared to have.

After much research I decided to order her a holster from their website. One of the things that helped me make my decision to buy this holster was that the owners of the company have also been making cell phone pouches for years and built this holster to resemble a cell phone holder. The other major reason I decided on this holster was that it was made to be worn on the outside the waist band, which I thought would be much more comfortable for my wife.

I was surprised that Sneaky Pete offered four different versions of the holster for my wife’s LCP. It was offered with a belt clip or belt loop and with flush plate or extended pinky. I decided to order her the LCP belt clip extended pinky design. It was reasonable priced at $54.95 plus shipping. The order was processed quickly and in less than a week my wife’s new holster was delivered.

The holster was packaged in a very nice custom looking black box and then inside the leather holster was in a cloth type bag that resembles something you would get a Crown Royal liquor bottle out of. I personally think the company spent way too much money on the packaging and could have possibly lowered the price of their holster if they would have gone with a cheaper package, which just ends up in the trash. 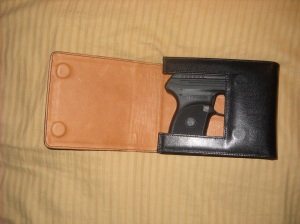 When my wife opened the wrapped package I gave her for her birthday she was excited and she thought the holster packaging was really upscale. However, the first thing she said once she got her new holster out of its packaging was that she thought the holster was too big to resemble any type of cell phone holder. She commented that it looked more like it would hold a small tablet. She and I were both impressed with the craftsman ship, the quality of the leather and the superb stitching.

The other half of her birthday present was dinner out at O’Charley’s restaurants. We put on our best blue jeans and left the house, of course with her sporting her new Sneaky Pete properly positioned on her belt. She commented several times as we walked around the house and yard about how comfortable the holster was, however when she went to sit-down she quickly changed her mind. She stated several times that in a sitting position the holster was way too big and bulky. When we got out of the car the first thing my wife did was pull her shirt over the holster to hid some of it size. If you are not familiar with the Ruger LCP it is a very small gun. It is so small that sometimes when we are dressed up I will leave my bigger 9 mm or my 1911 45 at home and carry her LCP in the front pocket of my dress pants.

The other thing that she did not like was that drawing the gun from the holster was not natural. First you have to move the flap and then to remove the gun, because the trigger is covered for safety, you have to use two fingers to lift the handle up before getting a good grip on the gun. After a month of wearing the holster she decided to put the LCP back in purse and the holster in the closet.

I have used the holster several times and for a man the size is not as big of deal. I wear it with my t-shirt out, making just the bottom of the holster visible. I also don’t like the act of drawing the gun from the holster but with practice I could become accustomed to it. I wear the holster with a suit or if we are going somewhere that I need to take extra care in making sure that the gun is covered at all times.

Final comments – The Sneaky Pete holster is made of high quality materials and looks very nice. I think the concept of a holster that guarantees total concealment of your gun is a great idea. But it is not right for everyone. For a woman with a small frame the holster is just too big and bulky. I think the holster is ideal for a business man who wants to carry and still look sharp. For our family and needs it just did not fit the bill. I will still wear it on occasions but it will not be an everyday carry holster for us. I think it is a great holster for special occasions but I just don’t think it is practical for your average everyday use, others may disagree but for us this holster will spend more time in the closet then on the belt.

I sincerely hope this helps you make an informed decision.

Please be sure to check out our other blog entries and or Facebook page at https://www.facebook.com/PalmettoPrepper .

By the time garden season gets into full swing most back yard gardeners have more cucumbers, peppers and onions then they know what to do with.

Every summer I take several quart jars and make up some Cool Cucumber Salad for my family and friends …. Enjoying a few for myself along the way. The recipe is easy and will last two months, as long as it is kept refrigerated.

Place the vinegar, sugar, celery seed and mustard seed in a sauce pan and bring to a boil, remove from heat and cool for one hour. While your vinegar mixture cools place your cucumber, onion and bell pepper in a large bowl and sprinkle salt on top. Mix all the vegetables together and place them into two quart jars (wide mouth jars work best). Once the vinegar mix has cool for an hour, pour over the vegetables and place in the refrigerator overnight.

The next day enjoy your Cool Cucumber Salad!